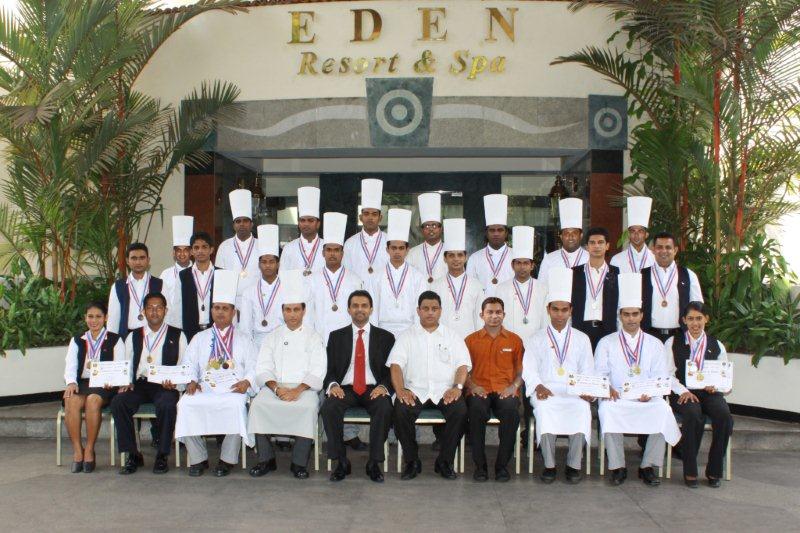 At the recently concluded 14th Culinary Art competition organized by the Chefs Guild of Sri Lanka, Eden Resort and Spa won an impressive total of 36 medals, including 07 Gold, 12 Silver and 17 Bronze. In addition, Eden was also placed 7th in the overall ranking amongst 211 hotels and other catering establishments from island wide.Culinary Art is Sri Lanka’s biggest annual food and hotel show which showcases the unique talents and creative skills of Sri Lankan chefs. It is highly regarded as the single most prestigious event aimed at developing culinary art in Sri Lanka.In this year’s competition, Eden Resort and Spa was awarded gold medals in the following categories; Ice carving (1 gold medal), Pastry show pieces (2 gold medals), Butter carving (1 gold medal), Apprentice hot cooking (live) [1 gold medal], and Arrack cocktail (2 gold medals).Commenting on this significant achievement, Mr. Kapila Jayawardena, Chairman of the LOLC Leisure Group said, “This has been a great achievement for the 5-star resort property since participating in a number of such competitions over the years. The credit and honour for securing a significantly high place at this year’s competition should go to the entire culinary brigade of Eden led by Executive Chef, Deepal de Alwis. Their extraordinary dedication and tireless efforts, not excluding the endeavouring contribution by the Food & Beverage team of the hotel, have indeed helped the team to grab some of the class medals at this year’s show which had a record number of entries taking part.”Eden Resort and Spa which commenced business in June 1995 is currently owned and managed by the LOLC Leisure Group. It has a total of 158 Rooms in operation (consisting of 113 Standard, 16 Deluxe, 23 Supeior, 2 Penthouses and 4 Suites) and is strategically located in the Golden mile of world famous Beruwela beach.