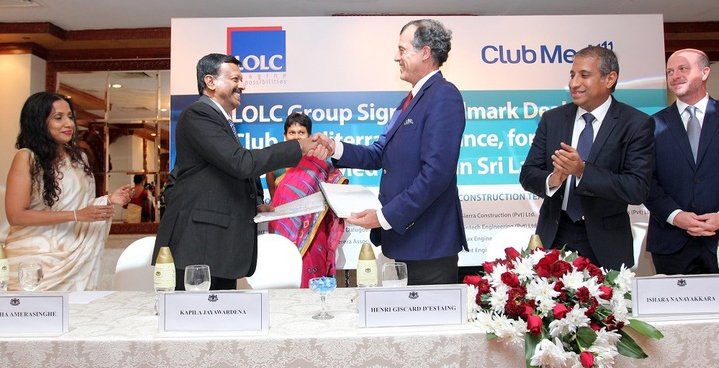 25 November 2016, Colombo: The LOLC Group and Club Mediterranee – France, signed a historic agreement on 25th November 2016 which will witness the Riverina Resort in Beruwela being branded as the First Club Med Resort in Sri Lanka. The landmark agreement was signed between LOLC Group Managing Director/CEO, Mr. Kapila Jayawardena and Mr. Henri Giscard d’Estaing, President and CEO of Club Mediterranee, on behalf of the respective companies. The establishment of the globally-reputed Club Med brand in Sri Lanka opens a new chapter in the country’s higher value tourism prospects. Under the terms of the agreement, Club Med will brand, market and manage the property as one of its many exotic Club Med destinations attracting affluent tourists from Europe and Asia to Sri Lanka. This development will further the industry’s aspirations to develop the island as a magnet for high spending tourists while simultaneously creating a significant number of direct and indirect employment opportunities. Club Méditerranée SA, commonly known as Club Med, is a French company specialising in operating Club Resorts at a number of exotic destinations around the world.The LOLC Group is a leading diversified conglomerate present in the foremost economic sectors of the country and over the past few months has aggressively expanded its leisure portfolio of properties in neighbouring Maldives. It has made significant investments in the Maldives, by securing some of the most sought after real estate in Male and in strategic locations among other Atolls. The LOLC Group is also diversifying its interests in the leisure sector by having set up a destination management company, an out-bound arm and a popular entertainment complex.Commenting on the new milestone, Mr. Kapila Jayawardena, Group Managing Director of the LOLC Group, said,”We are pleased to have Mr. Henri Giscard D’Estaing, the President and CEO of Club MÃ©diterranÃ©e, to sign this historic venture that ushers in one of the most prestigious tourism brands in the world to Sri Lanka. We are confident that this will be a mutually rewarding partnership that will add immense value to Sri Lanka Tourism. As a tourism destination, Sri Lanka has a rich and diverse offering spanning nature, culture, religion, adventure and eco-tourism, and we are confident that it will ascend in popularity and profitability to become one of Club Med’s premier properties. LOLC has forged strategic partnerships across its business sectors and this collaboration with yet another international brand reflects the strong investment potential of the group. Scheduled for completion in 2018, Sri Lanka’s First Club Med is yet another pioneering initiative by LOLC.President and CEO of Club Mediterranee, Mr. Henri Giscard D’estaing added, “We are delighted to embark on setting up the first Club Med in Sri Lanka, which is an exceptional destination. The beautiful island and the strategic location of the property reflects the exclusivity that Club Med looks for in its new locations. We believe that the Sri Lanka Club Med will be much in demand with our members. We have found in the LOLC Group, a dynamic partner with whom we expect to have a rewarding relationship. Doing business in Sri Lanka thus far has been a pleasure and we expect to forge closer bonds with this gorgeous island country going ahead. I am grateful to the Board of Directors and senior management of the LOLC Group for their warm welcome. I would like to thank the Government of Sri Lanka and the tourism authorities for facilitating the first Club Med in the country.Over the past 65 years, Club Med has been the specialist in helping transform emerging destinations into international high level tourist places, generating great global interest and immediate traffic wherever it settles.  Bali, Cancun, Punta Cana, the Maldives and Phuket are perfect examples of destinations launched into the list of world-class destinations after Club Med’s first resort was established in those locations.LOLC Group was represented by Mr. Ishara Nanayakkara, Deputy Chairman, Directors Mrs. K. Amarasinghe and Mr. Kamantha Amerasekera and Mr. Ajit Jayemanne, Consultant Director of the Leisure Division, whilst Club Med was represented by Mr. Xavier Desaulles and Mr. Marc De Jouffroy.