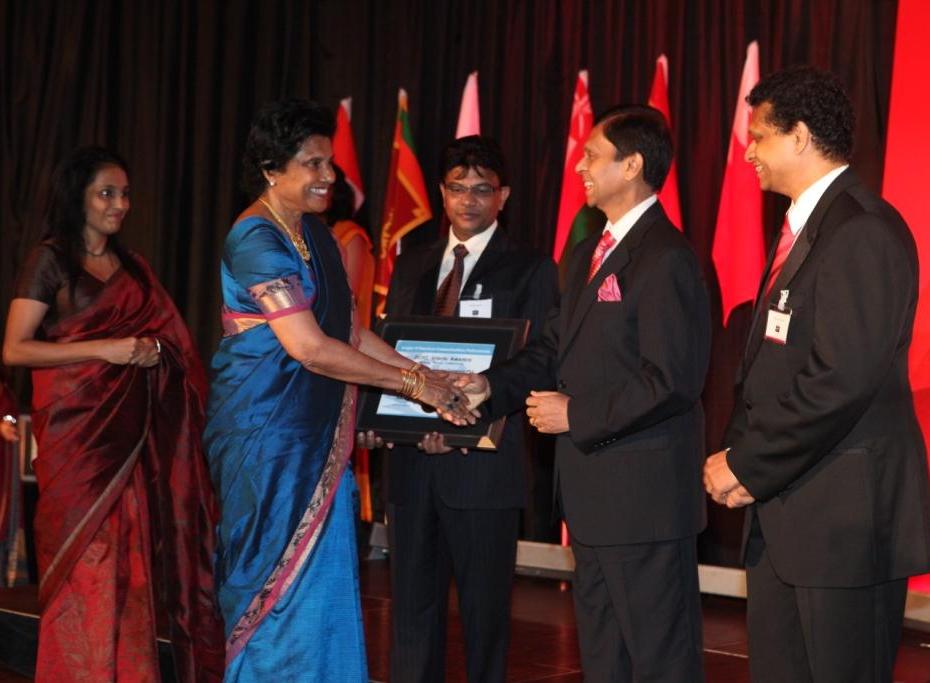 The LOLC Group’s Annual Report for 2010/11 titled “The First Full Year Since Peace Broke… A Conglomerate in the Making” bagged the coveted Gold award in the Conglomerates & Holding Companies category at the League of American Communications Professionals (LACP) Vision Awards 2010. In addition, the LOLC annual report was ranked 47th in the top 50 annual reports in the Asia Pacific Region. The Group’s Islamic Financial Services Unit, Al-Falaah’s annual report titled “Spreading the wings of Islamic Finance” too was awarded the bronze award in the Diversified Financial Services category. This is the second consecutive win for Al-Falaah whose 2009 Annual Report won the bronze award during last year’s LACP awards.At a ceremony held in Colombo last week the renowned annual report company, Smart Media, honoured the Sri Lankan award winners by giving away the respective awards for each category. The Governor of the Central Bank of Sri Lanka (CBSL), Mr. Ajith Nivard Cabraal attended as the honoured Chief Guest of the event.Many of the winners of the night were the crème de la crème of the Sri Lankan banking, financial, trading, plantation and non-profit sector, who through their exemplary annual financial reports have brought glory to the country at a global platform.The LOLC Annual Report with a unique 3D cover has received commendable reviews for its innovative and stunning creative direction, the overall thematic execution and extensive disclosures on strategy and financials which highlights the opening up of exciting new vistas of growth for both the Country and the Group.Commenting on this significant achievement, Mrs. Rohini Nanayakkara, the Chairperson of the LOLC Group said, “Winning the Gold Award in the Conglomerates & Holding Companies category is a very significant and a proud achievement for us. This year, we have won the Gold award for the first time in the Group’s maiden debut as a Diversified Conglomerate.”The Group’s exceptional financial and operational performances in the recent years have prompted many in the industry to hail LOLC as the Youngest Diversified Conglomerate of recent times. LOLC recently scaled down its Leasing business and did not renew the leasing license to move onto a Holding Company structure subsequent to receiving approval from the CBSL.The LACP Vision Awards is one of the top two, highly respected, global award schemes for annual reports. This Awards scheme recognizes the most outstanding annual reports of the year which showcases exemplary communications capabilities, whilst providing a platform for global organizations to demonstrate their achievements for the year in review. During this year’s competition, a record number of over 5,000 entries from around the world including the work of Top 500 fortune companies have been adjudged.