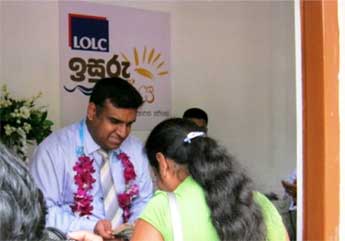 Colombo, Monday, 11th of October, 2010 -THE microfinance arm of the LOLC Group, Lanka ORIX Micro Credit PLC. (LOMC), celebrated the opening of its 50th Isuru Diriya Centre (IDC) located at the Bingiriya Post Office. CEO of LOMC Mr. Ravi Tissera and Head of Regional Branch Network Mr. Ashan Nissanka graced the ceremonial event as Guests of Honour. The operations of the Bingiriya IDC fall under the supervision of the Chilaw LOLC Branch.
With its 50th branch newly opened in Bingiriya this month, LOLC Isuru Diriya Centres have effectively covered most parts of the island, including the North and East, with the most recent centres opened in Chenkaladi, Kalmunai, Akkaraipattu, Pothuvil, Maho and Hatton.

LOMC’s Isuru Diriya Centres are set up consequent to the strategic partnership established between LOLC and Sri Lanka Post to offer micro credit services to rural communities situated at interior locations around the country where most financial institutions may be reluctant to enter due to inaccessibility, lack of infrastructure and isolation from the more preferred metropolis. With a vast network of over 600 Post Offices and over 3,000 Sub-Post Offices located across the island, Sri Lanka Post gives LOMC the opportunity to reach the rural communities around the country, and it has already opened its 50th IDC outlet within a relatively short period.

Still in its infancy of operations, LOMC was established a year ago, when it partnered with the internationally triple rated FMO -The Netherlands Development Finance Company -which is supported by the Dutch Government, in the hope of supporting the entrepreneurial interests that were emerging from the grass root communities of Sri Lanka. Commencing with a whopping US$ 10Mn financial assistance granted by FMO, LOMC began its fruitful mission to be the most preferred micro credit service provider in the country. As LOMC’s micro credit portfolio demonstrated a successful growth in the ensuing months, other well respected multilateral agencies in the international development sector such as, the Triodos Bank-Netherlands, Symbiotics-Switzerland and Triple Jump-Netherlands also united with LOMC to strengthen its services further and to provide expertise on sustainability measures.

Reflecting on the success of the LOMC ‘Isuru Diriya’ expansion program, CEO of LOLC Micro Credit Ltd. (LOMC), Mr. Ravi Tissera commented, “It was not too long ago that we commenced this journey with just 9 IDCs opened at the inception of LOMC in the year 2009. Through the strategic alliances built with our funding partners, technical assistance providers, and Sri Lanka Post, we have reached deep into the innermost corners of the country, providing Micro Credit services to a vast community of SMEs and Agri-based businesses. The milestones that we as the industry’s first non-banking Micro Credit institution have achieved were because of the valuable human connection we have cultivated over the years under the patronage of the LOLC Group. I commend all members of our LOMC team across the island for their unwavering commitment, and our loyal customers for their unyielding faith in us.