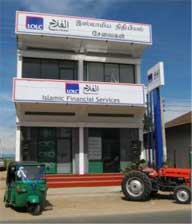 (IBU) of LOLC commenced its operations in Kalmunai last week by opening its 3rd fully fledged Islamic Financial Services center ( IBU Centre ) located at No: 986, Akkaraipattu Road, Kalmunai. The IBU’s Eastern expansion commenced in April early this year with the opening of its first IBU Centre in Kattankudi, and the second IBU Centre located at the Town centre Post Office in Oddamavadi.

LOLC Al-Falaah is a business unit of LOFC providing Shari’ah compliant financial services, with a special approval to function within the framework of LOFC -a registered finance company under the Monetary Board of the Central Bank of Sri Lanka (CBSL). With a mission to assist the local entrepreneurs of the Islamic community, it was a fervent and conscious effort of LOLC Al-Falaah to adhere to a globally accepted Islamic financial system that prohibits financial practices such as Riba or Usury, which are considered to be Haraam.

Amidst the recent backdrop of large scale misuse of funds by various high profile globally renowned financial corporations, which led to the global economic meltdown, an emerging revelation highlighted the dire need for a more ethical and regulated financial system to be formulated. It was evident that the strength of the Islamic finance sector -which performed consistently while many of the conventional financial systems in the industry were breaking down at a rapid rate -was its Shari’ah regulated guidance.

The fundamental emphasis on Justice is the basis of Islamic Financing, wherein it propagates strict adherence to Sharia’ah compliant principles, which lends a moral and ethical guidance that ensures transparency, accountability and governance. For these reasons, Islamic Finance System gained a worldwide acceptance and popularity as a more reliable and trustworthy option of financing – an alternative to the conventional system -which is also in keeping with vital religious requirements. As Islamic Banking & Finance gained precedence in the global financial sector, its popularity found a rich soil to develop in Sri Lanka, and as a result, LOLC entered the Islamic Financial Services Sector in 2003, establishing its own fully fledged Islamic Business Unit branded Al-Falaah in 2007.

At present, all financial activities of LOLC Al-Falaah are based on globally recognized Shari’ah financing practices, and are supervised by an Internal Shari’ah supervisory board chaired by industry leading local and international Shari’ah scholars.