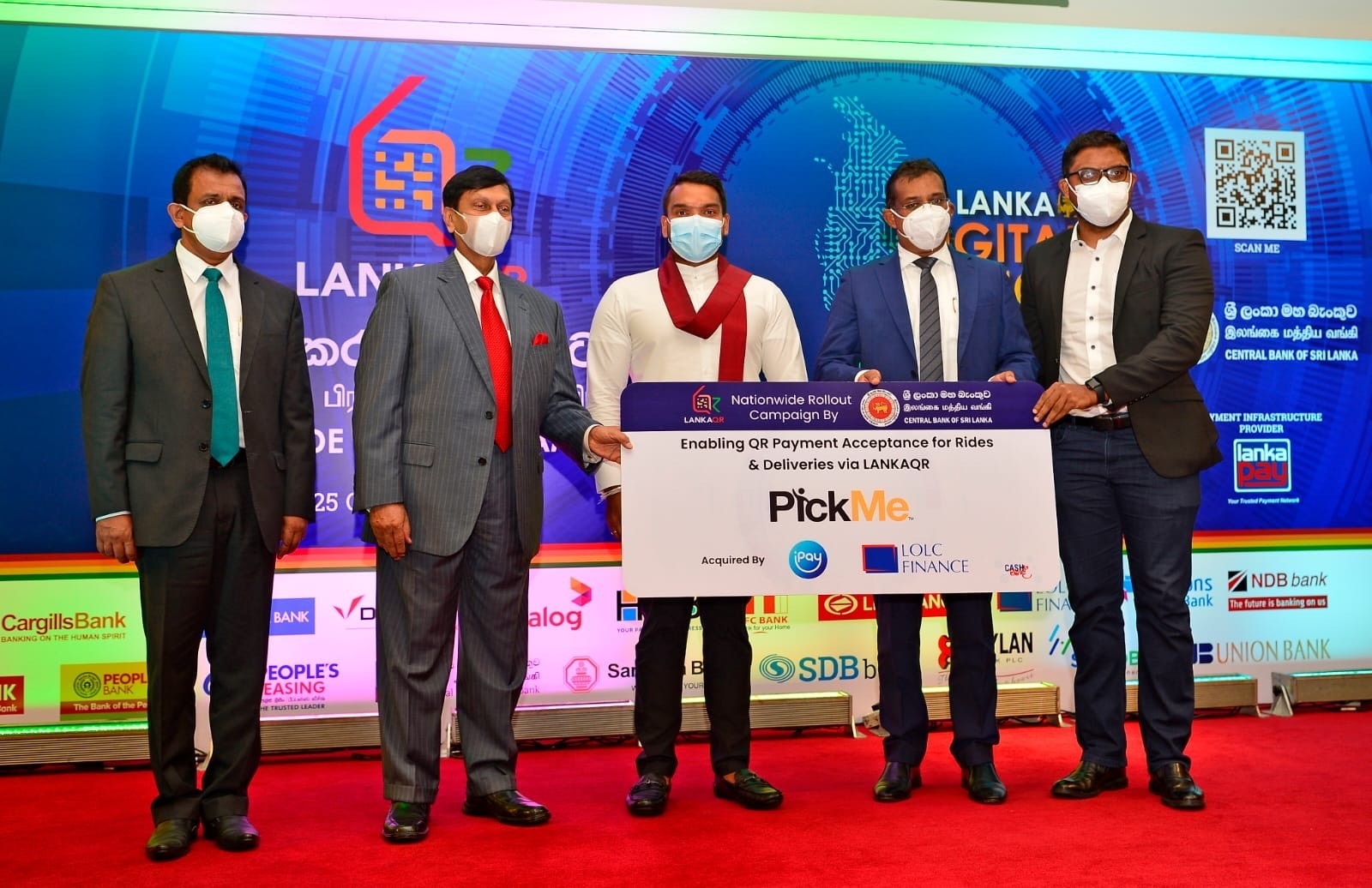 The LANKAQR Nationwide Rollout Campaign was launched recently at the Central Bank of Sri Lanka (CBSL) with the aim of promoting LANKAQR payments amongst the small and medium merchants as well as consumers throughout the nation. During this national event, iPay ceremonially launched the fare enablement feature for QR payment acceptance for rides and deliveries carried out through PickMe. iPay partnered with the country’s first and leading ride-hailing app, PickMe, to offer the best of convenience to its customers throughout the nation. Through this partnership of national importance, iPay has enabled LankaQR payments via CASA (Current Accounts, Savings Accounts) to PickMe users. Payments can be made via iPay or any LankaQR enabled app.

During the event, CBSL facilitated the on-boarding of several government and retail institutions by LANKAQR certified banks so that these institutions may now accept LANKAQR payments from customers. With this nationwide rollout campaign, the CBSL is confident that the general public will utilize LANKAQR for their daily transactions, at a greater frequency.

LankaQR code is the standardized national quick response code introduced to Sri Lanka by the CBSL. It is used as a form factor to represent a merchant accepting payment and will enable the digitalization of the payment ecosystem in Sri Lanka between customers and merchants. Customers can make payments via LankaQR by simply scanning the code presented by a merchant, using any digital payment app which adheres to the LankaQR standard. The LankaQR technical specifications are issued by the CBSL, while its operating guidelines as well as its branding guidelines are issued by LankaClear (Pvt) Ltd, with prior approval from the CBSL.

Commenting about the LANKAQR Nationwide Rollout Campaign, Conrad Dias, Director/CEO of LOLC Finance PLC said, “In the current context of the global pandemic, it is imperative to reduce the usage of cash than ever before and move towards digital payment methods – hence this initiative is extremely timely. As a leading and responsible payment aggregator in Sri Lanka, iPay is dedicated to support this transformation on a national scale and the partnership with PickMe is a testament to that promise. Backed by LOLC, Sri Lanka’s most valuable and globally diversified financial conglomerate, we will continue our efforts to propel this national cause”.

CEO of PickMe, Mr. Zulfer Jiffry noted that most card transactions result in a percentage going to a foreign company that facilitates the payment platform, even if the transaction is carried out locally. “LankaQR transactions are facilitated locally in Sri Lanka Rupees which prevents dollar outflow at a time when we need to preserve our foreign exchange. This is why we considered it important to introduce this platform to our partners and customers at this crucial time, collaborating with iPay. As a registered Sri Lankan company, we support this initiative and hope to make our customers aware that every time they do transactions which culminate outside the country, it only helps the current crisis to become bigger.”

iPay is a simple, easy to use, real-time payment platform built on an architecture that allows easy integration with any system. It has been designed with a host of features, giving the user a unique, one of a kind transaction experience. The vibrant and well-organized graphical user interface of iPay promises a unique experience whilst carrying out various types of payments. LOLC Finance currently operates as iPay’s merchant acquiring partner.